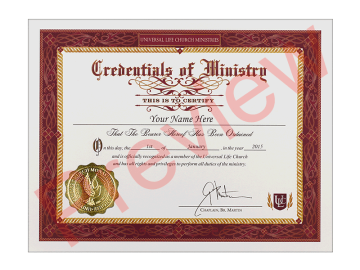 Click here to get ordained.
Posted by Mr. Marc at 2:14 PM No comments:

“Anything,” Chris said, “especially religion can be corrupted and become a spring board for evil doings. If something is twisted and stays twisted then this can be true of science or religion. Nothing is ever that black and white. I just read that 117 Russians are in the hospital from drinking Holy Water. If the water is magically pure then they should be fine. But whatever contagions in the water will still be corrupt. Water remains water. These things are concepts thought up by human brains. Nature has no morality.” Chris was sure Christianity is not according to reality, and this was his belief. Here is my reply to him:
“Both religion and science can be corrupted. Both are corrupted, and this is not a surprise. All that is valuable will be corrupted. But the question is, with the example of those Russians who suffered from drinking water, is this situation the result of a corruption that is in the core of the faith or from something that got twisted far from that core?' Your reaction, however, has something which is way more important to answer before I deal with this question.

Nature
This is what you said, Chris: ‘These things (you mean the question of the holiness of the water) are thought up by human brains. Nature has no morality.’ That nature has no morality is certainly possible, I won't try to deny that. The problem is that the only thing we know from nature is about that nature in its present state. We can see that nature is declining, genetics and the study of the galaxies, for example, give strong evidence for that, but we have no idea how that nature looked like before it fell. Neither do we have any idea how it will look like when it reaches point zero. We don't know how it fell, by what forces it was brought to fall and even if there are any powers beyond nature, which we call supernatural powers. About those there is nothing we can say from our knowledge about nature, because these powers would be supernatural. And if we would find out something about those supernatural powers, like that they would not exist, than we do not know whether they are true or not, as our rationality, from a naturalistic viewpoint, is based on irrational processes. That is the difficulty we face when we are discussing this very subject. As a naturalist you say: "Nature has no morality," which proves you a naturalist, while you are, from naturalism unable to verify your words. Your words are the result of irrational processes, not the result of logic. I am a christian, so my words are certainly not based on irrational processes, but on faith. The research I do can be true or not, but at least it would be based on the evidence, and not on merely irrational chemical processes, indeed without morality.
"These things are concepts thought up by human brains," you said. You could also have said: "These things are based on chemical processes. It certainly could disqualify the truth of the thing. But so does it disqualify each other's brain activity, it would disqualify all science and philosophy. You cannot say that this knowledge would disqualify only certain parts of this brain activity, like religion. There are probably hundreds of ways to disqualify religion, but naturalism is not among them, as a disqualification of religion from naturalism would disqualify naturalism as a whole as well. Also the naturalistic believe that nature has no morality appears wrongly to me. As humans we know about morals, but we also know morals. Morals that are certainly not derived from nature itself. Morals derived from nature are rather 'survival of the fittest', then goodness or care for widows. True morals cannot be natural, so without a super naturalistic believe there is no possible morality. That is a bit a different discussion, so I keep it here, and head to the first question.
Miracles
'Is this situation result of a corruption that is in the core of the faith or from something that got twisted far from that core?' That was the question that's needed to be answered, and I believe we now have the right ground to answer this question. We know that most situations apply to, what we call, the laws of nature. When a event does not apply to the laws of nature it is called a supernatural event or a miracle. We know from situations that water was turned into wine or that water could do a healing work. The people of that time where well aware of the laws of nature (though they may not have called it like this), if they weren't aware of that they wouldn't have called it a miracle. As long as you don't know the natural you can never distinguish the natural from the supernatural. Miracles do exist. But those situations differ from this very situation. The one who said this water was holy did not risk anything by telling others it was so. But those who were drinking of it took that risk. All the miracles where verifiable, and all have been verified. This account was not verifiable, because there is no outer change only if the water is holy. If it had been healing it would be different, as a doctor can easily check that. So, I would certainly distrust someone who told me that some water would be holy, and I would surely be suspicious to someone who told me I could drink as much from the water as I wanted. A miracle can be a timely change of the natures course, but certainly not a permanent change of all its laws. And I know when I drink too much water, that I put my health to risk, instead of that I would receive a better health. I am sure this faith was twisted. And I do know where it got twisted in the last place: at their preacher, as they took his word for it that this water would be good. Secondly, it might have been twisted before when they (did not) learn how to mark the real miracles, and to keep away from the fake ones. Where we can put the exact mark for the twist I cannot say. But I know the bible itself gives us clear information we can use to distinguish real and fake miracles.”

Christ-massacre is gone, the snow is melting. The world has turned back to it's normal state. Have a blessed christmas. Rejoice!

christmas bekuar (no idea if I have translated this well)

Firstly, Blogger.com does not work as it is supposed on Internet Explorer. I recommend to use Mozilla Firefox, Safari or Google Chrome.

Secondly, Dutch Hermit has only view contributors yet. We'd like to have more. If you would like to participate in this project, please send an e-mail to marcus.progtaros@gmail.com